Exploring the boundaries of human knowledge

• GSLV-F10 or more popularly Chandrayaan-2, though ISRO’s second mission to the moon, will be ISRO’s first mission to land a spacecraft on moon and explore its surface with a rover.

• Chandrayaan-2 will be the year’s third bid at a moon landing, following China’s Chang’e 4 successful landing on the moon’s far side (near the south pole) and the Israeli spacecraft Beresheet that crashed on the moon in April.

• The 3,840-kg Chandrayaan-2 spacecraft is a totally indigenous mission and consists of an Orbiter, Lander and Rover.
– The orbiter will circle the moon at 100 km height and perform the objectives of remote sensing the moon;
– The five-legged lander called Vikram, named after Vikram Sarabhai – the father of the Indian Space Research Organisation, will descend on the moon on or around September 6 and
– The robotic rover, Pragyan, that will be used mostly for insitu experiments. The six-wheeled Rover will move around the landing site in semi-autonomous mode, about 500m over the next 14 earth days — or one day on the moon, as decided by the ground commands; It will use solar energy for its functioning.
– Note: Unlike Earth, which turns on its axis every 24 hours, the Moon takes about 30 days to make a complete rotation. This means that days and nights on the Moon last two weeks.

• GSLV-F10/Chandrayaan-2 Mission will be taken to the moon by a Geosynchronous Satellite Launch Vehicle called GSLV-Mk III.

• Chandrayaan-2, the lunar lander mission launched in July 2019, has 14 Indian payloads or study devices to perform mineralogical and elemental studies of the lunar surface.

• It is the country’s first space mission headed by women: Ritu Karidhal, the mission director, and M. Vanitha, the project director.

• July 2019 is a special year for space history. Other than it being the successful launch of Chandrayaan-2 into earth orbit, it also marks the 50th anniversary of the famed Apollo 11 mission of July 1969 that for the first time saw humans land on the moon.

Where will Vikram Land?

• Most of the Moon landing missions so far were done on equatorial region of the Moon as:

1. Lunar south pole is shadowy and dark in places. Without Sunlight, the lander and rover spacecrafts cannot work for long.

2. The landing manoeuvre on this region is very difficult.

• ISRO has chosen a landing area at the hitherto unexplored lunar south pole, making it the first agency to touch down at the south pole if it succeeds in its first landing attempt.

• Only Russia, the U.S. and China have soft-landed on moon so far (not at the South Pole). 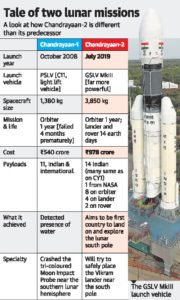 Why did the ISRO choose the Moon’s South Pole as the Landing site for Chandrayaan-2?

• The lunar South Pole is one of the most compelling places in the entire Solar System.

• The towering massifs of the South Pole-Aitken Basin can be accessed, and these massifs contain impact melt that will allow scientists to unambiguously determine the age of this huge basin and could provide insights into planetary formation.

• Permanently shadowed craters may harbour reservoirs of ices and other volatile compounds that could serve as a tremendously valuable resource for future explorers.

• Additionally, these volatile deposits could contain a priceless record of water composition dating back to the beginning of our Solar System, an incomparable dataset for astrobiology investigations.

• A few mountain peaks near the pole are illuminated for extended periods of time, which could provide near-constant solar power for a permanent lunar outpost sometime in the far future.

• Chandrayaan-1 discovered water on Moon earlier. Now for deeper understanding and knowledge about Lunar water, it requires to explore this icy region.

Why not North Pole?

• The south pole of moon has a large shadowy region (larger than that in North pole).

• It contains places that remains in permanent darkness where Sunlight never reaches.

• Further, the South Pole is at the edge of the Aitken basin, the largest impact basin in the Solar System.

• Note: NASA’s Lunar Reconnaissance Orbiter is still flying over the South Pole region at an altitude of only 30 km, collecting a wealth of data.

Why should we Study the Moon?

To Push the Boundaries of Scientific Knowledge

• Clues to some of the most fundamental questions about our Solar System lie hidden in the craters, hills, and valleys of the moon.

• Studying these will help us unravel the mysteries of our Universe. To Unleash Innovation

• Throwing grand challenges to the youth will unleash the innovation, spurring future research and development.

• Industry has always been a partner in ISRO’s space programme and the future holds bigger opportunities for strengthening the alliance.

Engage with the Public

• Chandrayaan-2 will inspire the whole nation and motivate the youth to undertake real-life applications of science and technology – to be second to none in solving the problems of man and society.

• India will be a key contributor in exploring and uncovering the secrets of the Universe – an association shared by the global community.

• A few sites (Sithampoondi and Kunnamalai) near Salem in Tamil Nadu had the ‘anorthosite’ rock that somewhat matches lunar soil in composition and features, which was used by the ISRO to create Moon’s surface like conditions.

• ISRO has prepared a site named Challakere in Karnataka to resemble lunar craters and to conduct preliminary tests of Chandrayaan-2 lunar lander’s sensors.

• After the Chandrayaan-2 mission launch, another lunar journey is in the offing around 2024 to bring soil and rock samples back from the South Pole of the Moon.

• China’s Chang’e 5 mission in December this year will be China’s first sample return mission, it aims to come back with least 2 kg of lunar soil and rock samples back to the Earth.

• It is an expendable launch system;

• It is a 3 stage vehicle with solid, liquid and cryogenic stages; it has three variants – GSLV MK-I, MK-II and GSLV MK-III.

• GSLV MK-III, the most powerful indigenous rocket, is conceived and designed to make ISRO fully self reliant in launching heavier communication satellites of INSAT-4 class, which weigh 4500 to 5000 kg.

• A cryogenic engine/cryogenic stage is the last stage of space launch vehicles which makes use of Cryogenics.

• Cryogenics is the study of the production and behaviour of materials at extremely low temperatures (below -150 degree Centigrade) to lift and place the heavier objects in space.

• A cryogenic engine provides more force with each kilogram of cryogenic propellant it uses compared to other propellants, such as solid or earth-storable liquid propellant stages and is more efficient.

• Cryogenic engine makes use of Liquid Oxygen (LOX) and Liquid Hydrogen (LH2) as propellants – which liquefy at -183 deg C and -253 deg C respectively, which are stored separately.

• However, cryogenic stage is technically a very complex system compared to solid or earth-storable liquid propellant stages due to its use of propellants at extremely low temperatures and the associated thermal and structural problems.